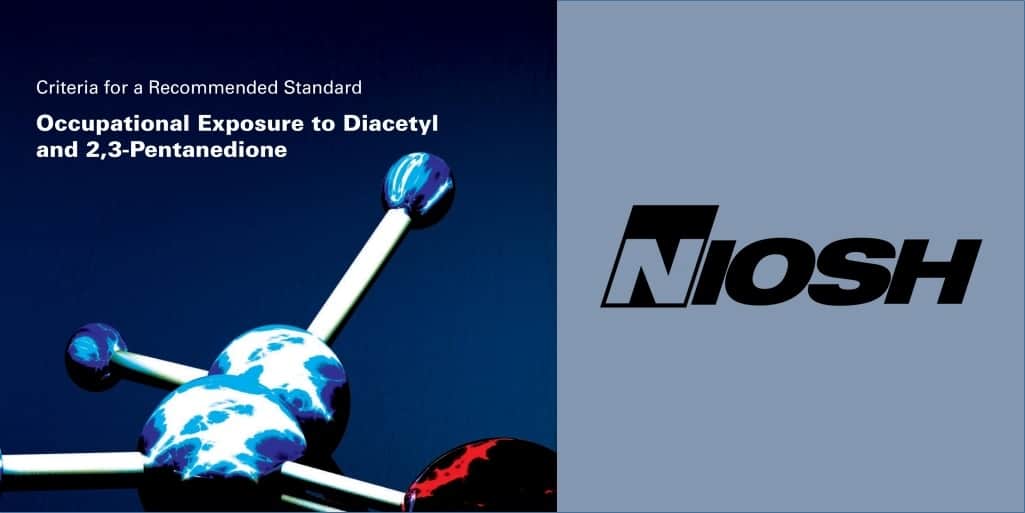 Criteria for a Recommended Standard – Occupational Exposure to Diacetyl and 2,3-Pentanedione

Diacetyl and its substitute, 2,3-pentanedione, are widely used flavoring compounds.

There have been extensive reports of serious respiratory disease and decreased lung function in employees exposed to diacetyl.

The NIOSH objective in establishing recommended exposure limits (RELs) for diacetyl and 2,3-pentanedione is to reduce the risk of respiratory impairment (decreased lung function) and the severe irreversible lung disease obliterative bronchiolitis associated with occupational exposure to these compounds.

In this disease the smallest airways in the lungs, the bronchioles, become scarred and constricted, blocking the movement of air. In addition, maintaining exposures below the RELs will help prevent other adverse health effects including but not limited to irritation of the skin, eyes, and respiratory tract in exposed employees.

The recommendation to limit exposure to diacetyl and 2,3-pentanedione is based upon data from human and animal studies and the quantitative risk assessment; however, additional considerations include sampling and analytical feasibility and the achievability of engineering controls.

Diacetyl is used extensively in the food flavoring and production industries, and occupational exposure to this substance has been associated with severe respiratory impairment and the disease obliterative bronchiolitis. 2,3-Pentanedione, which has been used as a substitute for diacetyl, is also of concern because of structural similarities with diacetyl and because animal studies show similar toxicity for the respiratory tract [Hubbs et al. 2012; Morgan et al. 2012; Morgan et al. 2016].

Another compound, acetoin, was present along with diacetyl in many of the workplaces where obliterative bronchiolitis occurred in employees who made or used diacetyl [Kullman et al. 2005; van Rooy et al. 2007].

However, current data indicate that acetoin is considerably less hazardous than diacetyl and it does not have the reactive α-dicarbonyl group, which has been implicated in the toxicity of diacetyl and 2,3-pentanedione [Hubbs et al. 2016; National Toxicology Program 2015; Zaccone et al. 2013].