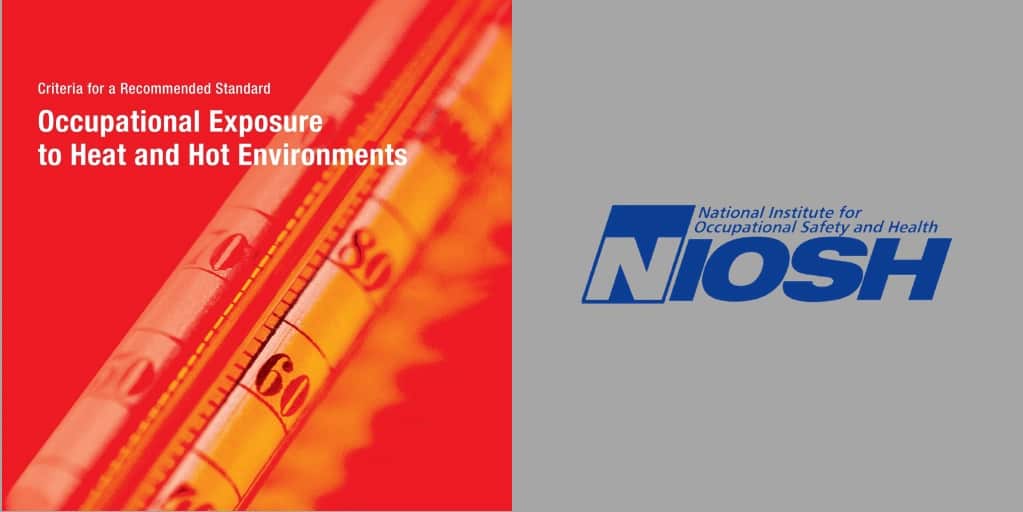 Occupational exposure to heat can result in injuries, disease, reduced productivity, and death.

To address this hazard, the National Institute for Occupational Safety and Health (NIOSH) has evaluated the scientific data on heat stress and hot environments and has updated the Criteria for a Recommended Standard: Occupational Exposure to Hot Environments [NIOSH 1986a].

This document was last updated in 1986, and in recent years, including during the Deepwater Horizon oil spill response of 2010, questions were raised regarding the need for revision to reflect recent research and findings.

In addition, there is evidence that heat stress is an increasing problem for many workers, particularly those located in densely populated areas closer to the equator where temperatures are expected to rise in relation to the changing climate [Lucas et al. 2014].

Workers who are exposed to extreme heat or work in hot environments indoors or outdoors, or even those engaged in strenuous physical activities may be at risk for heat stress.

Other heat injuries, such as burns, may occur as a result of contact with hot surfaces, steam, or fire. Those at risk of heat stress include outdoor workers and workers in hot environments, such as fire fighters, bakery workers, farmers, construction workers, miners (particularly surface miners), boiler room workers, and factory workers.

In 2011, NIOSH published with the Occupational Safety and Health Administration (OSHA) a co-branded infosheet on heat illness.

Through this combined effort, many recommendations were updated, including those on water consumption. In addition, factors that increase risk and symptoms of heat-related illnesses were more thoroughly defined.

In 2013, NIOSH published “Preventing Heat-related Illness or Death of Outdoor Workers”. Outdoor workers are exposed to a great deal of exertional and environmental heat stress.

Additional information on the biological effects of heat has become available in recent studies, specifically increasing the understanding of the central nervous system, circulatory regulation, the sweating mechanism, water and electrolyte balance, and dietary factors.

New knowledge has been established about risk factors that can increase a worker’s risk of heat-related illness.

Those over the age of 60 are at additional risk for suffering from heat disorders [Kenny et al. 2010].

As obesity and the increasingly overweight percentage of the population in the United States continue to increase, this is now a major health concern in workers. Heat disorders among the obese and overweight occur more frequently than in lean individuals [Henschel 1967; Chung and Pin 1996; Kenny et al. 2010].

Another factor affecting heat-related illness is use of drugs, including cocaine, alcohol, prescription drugs, and caffeine.

Caffeine use has long been argued against, as it has a diuretic effect and may reduce fluid volume, leading to cardiovascular strain during heat exposure [Serafin 1996].

However, more recent studies have found that the effect of caffeine on heat tolerance may be much less than previously suspected [Roti et al. 2006; Armstrong et al. 2007a; Ely et al. 2011].

The definition of heat stroke has also changed in recent years. Heat stroke is now classified as either classic heat stroke or exertional heat stroke which is more common in workplace settings. Characteristics of the individual (e.g., age and health status), type of activity (e.g., sedentary versus strenuous exertion), and symptoms (e.g., sweating versus dry skin) vary between these two classifications [DOD 2003].

Re-education is needed in the workplace especially about symptoms. Many workers have incorrectly been taught that as long as they were still sweating they were not in danger of heat stroke.

Measurements of heat stress are largely unchanged since the last revision, although additional information has been added about bimetallic thermometers and the psychrometric chart. The latter is a useful graphic representation of the relationships among dry bulb temperature, wet bulb temperature, relative humidity, vapor pressure, and dew point temperature. Such charts are especially valuable for assessing the indoor thermal environment.

In addition, many modern computers and mathematical models can be used to calculate heat stress indices, based on weather station data.